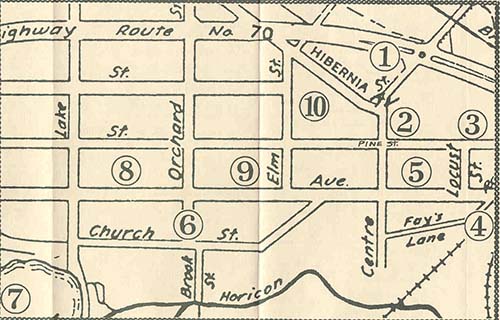 1. Old St. John's Roman Catholic Church
The oldest Catholic church in Ocean County. First Mass in May, 1874. Built by Irish Immigrants here working on the railroad. Surrounded by old graveyard, the church is the present home of the Lakehurst Historical Society.

3. Pine Street
Site of old worker's cottages and one of the Borough's oldest sections.

4. The Railroad Area
Once the site of one of the largest shop areas of the Central Railroad of New Jersey, with a roundhouse, old locomotive sheds, and a passenger and freight station.

5. Downtown Lakehurst
Still the only downtown in the area, it remains a vital business center to area residents.

6. Church Street
Considered by many to be Lakehurst's most beautiful street.

7. Beautiful Lake Horicon
A walk around Lake Horicon is beautiful at any time of the year. Stop for a spell and enjoy the view.

8. Today's site of the Lakehurst Elementary School
Named as "One of America's Outstanding Schools" by Redbook Magazine. From 1897 - 1937, this was the site of the awe-inspiring spires of the famous Pine Tree Inn, a luxurious resort hotel.

9. Union Avenue
Union Avenue is a long tree-lined street running east to west in the Borough. It is the site of older, large homes. The former Laurel Cottage, formerly part of the Pine Tree Inn's holdings remains as beautiful today as it once was.